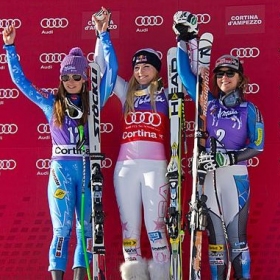 In 2022, the Women's Ski World Cup is back in Cortina d’Ampezzo, after a two years break since the mountain town hosted the Ski World Championships in February 2021 and was set to host the Ski World Cup Finals in 2020.The downhill competition will take place on January 22nd, whereas on 23rd January athletes will compete on the superG track.The Women's Ski World Cup is part of the vast international circuit of Alpine ski races which involves every year the World's most famous ski destinations throughout Europe, North America and sometimes Korea and Japan.

The event confirms Cortina as a priviledged setting for winter sports and Alpine skiing in particular: athletes compete every year on the Olympia delle Tofane slope, which has a sports history going back to the Winter Olympics of Cortina 1956.Don't miss this leg of the Women's Alpine Ski World Cup combining the adrenaline of the race with the sports heritage of Cortina in the unmatched panorama of the Dolomites.

We use both our own cookies and third party cookies to improve our services. If you decide to continue the navigation we consider that you accept their use. Information