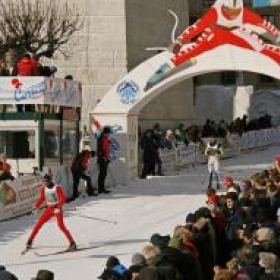 The Classic Ski-Marathon
The Granfondo Dobbiaco-Cortina is a traditional ski marathon races in Italy, it takes place since 1977 and it’s one of the biggest races in Italy, a good second after the Marcialonga. In 2010 its track hosted the Tour de Ski; from that moment it began to enjoy international fame. From 2016 to 2021 the Granfondo was one of the Visma Skiclassics races, a circuit for professional teams, thanks to which it was discovered by many Scandinavian enthusiasts.

The long history of the Dobbiaco-Cortina Granfondo began on April 3, 1977 after a heavy snowfall. The former Olympic skier Alfredo “Fredy” Dibona proposed to the current president of the organizing committee Herbert Santer to do a cross-country race and since then, numerous groups of sportsmen and friends from Dobbiaco and Cortina are busy renewing the charm of an event that is not only sport, but also a symbol of the historical and geographical links between the two Dolomite communities of Dobbiaco and Cortina.

The traditional track of 42 km in classic technique runs along the old railway of the Dolomites, which was built during the First World War and disused in 1962. The site of the tracks of the unforgettable blue train has become a place for events and sporting activities, thanks also to the gentle slope and naturalistic or architectural beauties: woods, lakes, bridges, tunnels and old stations, all surrounded by popular and fascinating Dolomite peaks.

We use both our own cookies and third party cookies to improve our services. If you decide to continue the navigation we consider that you accept their use. Information